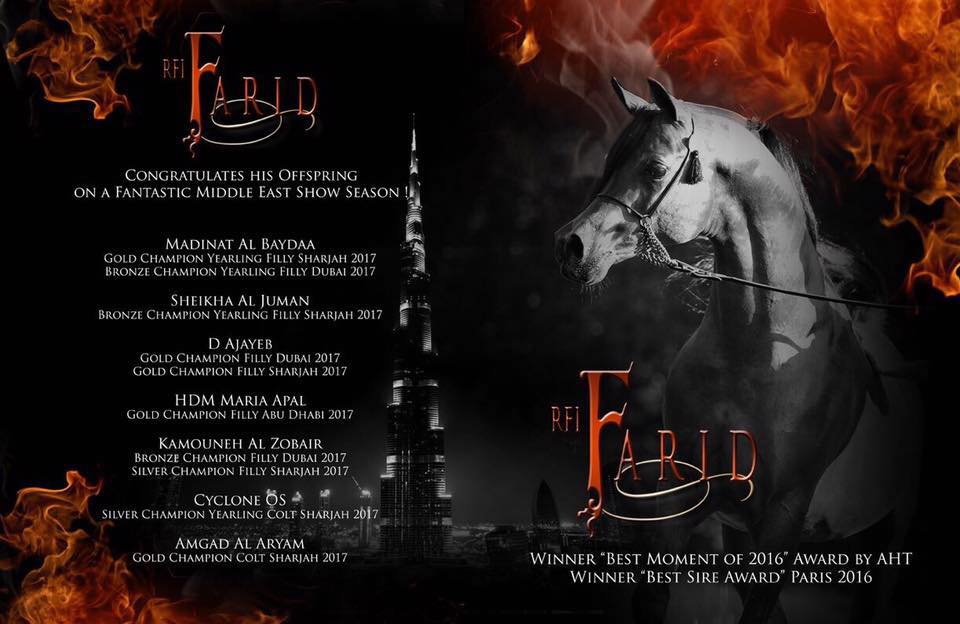 A few of his first show records: 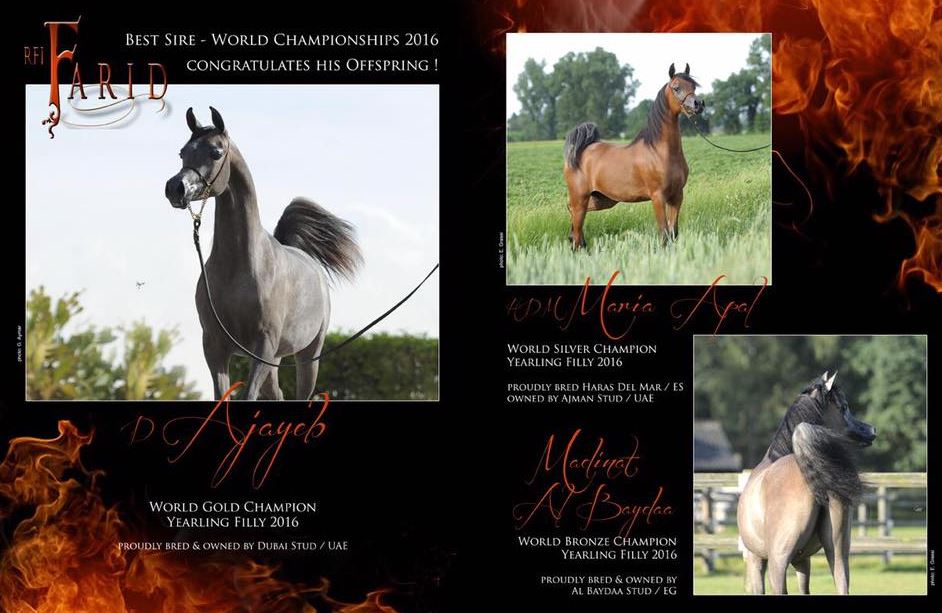 But it is not only his show records which let him stand out of the crowd but far more his successful progeny … e.g. at the WorldChampionship 2016:
RFI FARID PARTNERSHIP would like to thanks all the people’s who voted:
“RFI FARID, sire of the Gold, Silver and Bronze Yearling Filly Winners at the World Championship”
and WINNER OF THE BEST MOMENT OF 2016 !!
Himself an International Champion RFI FARID was the sire of World Yearling Gold Champion Filly D Ajayeb, Silver Champion HDM Maria Apal and Bronze Champion Madinat Al Baydaa, an extraordinary achievement and an approval of his ability as a sire, especially considering that all three fillies were out of ompletely different mares. This achievement made him the Leading Sire of the Paris-Show, a title that Marwan Al Shaqab has claimed for the last decade.

Our grateful thanks go to Raphael Curti, the whole Privilege Team and the “RFI Farid partnership” who allows us to breed with RFI Farid to one of our best mares: Khaliq Nayla. We know RFI Farid since his debut in 2010 on European soil at the Kauberplatte B-Show which he easily won as GoldChampion and Frank Spoenle on the lead. Since then we followed his career and we are now super happy to incorporate him in our breeding program.

Lovely words by Jeff Wallace:
“RFI Maktub to RSD Dark Victory by Bey Shah and to Ali Jamaal x RFI Fayara El Shiraz to Ali Jamaal and to the double Celebes-bred Polish stallion Etat – onto Aladdinn, El Shaklan and the great mare Bint Miss Fire by Gdanask by Bask and to Amaal by Morafic, full brother to Shaikh Al Badi, sire of Ruminaja Ali
A bay stud foaled during the year 2007
Now proudly owned by The RFI Farid Partnership
Standing inside the gate of Privilege – Belgium
Raphael Curti and Philip Looyens
Michael Byatt in America
Christine Jamar of Jadem Arabians

RFI Farid boasts the most gorgeous blend of many breed greats – having just the right amount of good Polish breeding behind him coupled with a Bey Shah sire line and two close-crosses to the legendary sire Ali Jamaal. The results, in fillies, during the Salon du Cheval of last year, sealed the deal on Farid showing the world just what he is capable of. His message, loud and clear, is that he is capable of producing True Greatness, a quality to covet in a sire.

However, it is the German photographer Gregor Aymar here, that exposes his true greatness, behind the lens, in this exquisite photograph of a young sire setting the world on fire. Remember it was Gregor who also gave us the near-perfect pictures of QR Marc in the sand and of Lutfina AA with Raphael and the herd of cows.

Kudos to the Camera of a Master in Action.”