Since we started breeding Arabian Horses we know and we love the original Polish E-line goinjg back to “Emigracja – The Pearl of Michalow”.
Emigracja represents the fifth generation of champion produce through Michalów foundation mare Estokada. For a long time we were looking for the right representative mare of this famous E-line … and coming to Poland for the Pride of Poland Auction Sale in 2016 we found the right one!
A pedigree to dream of!
See all the details below please. 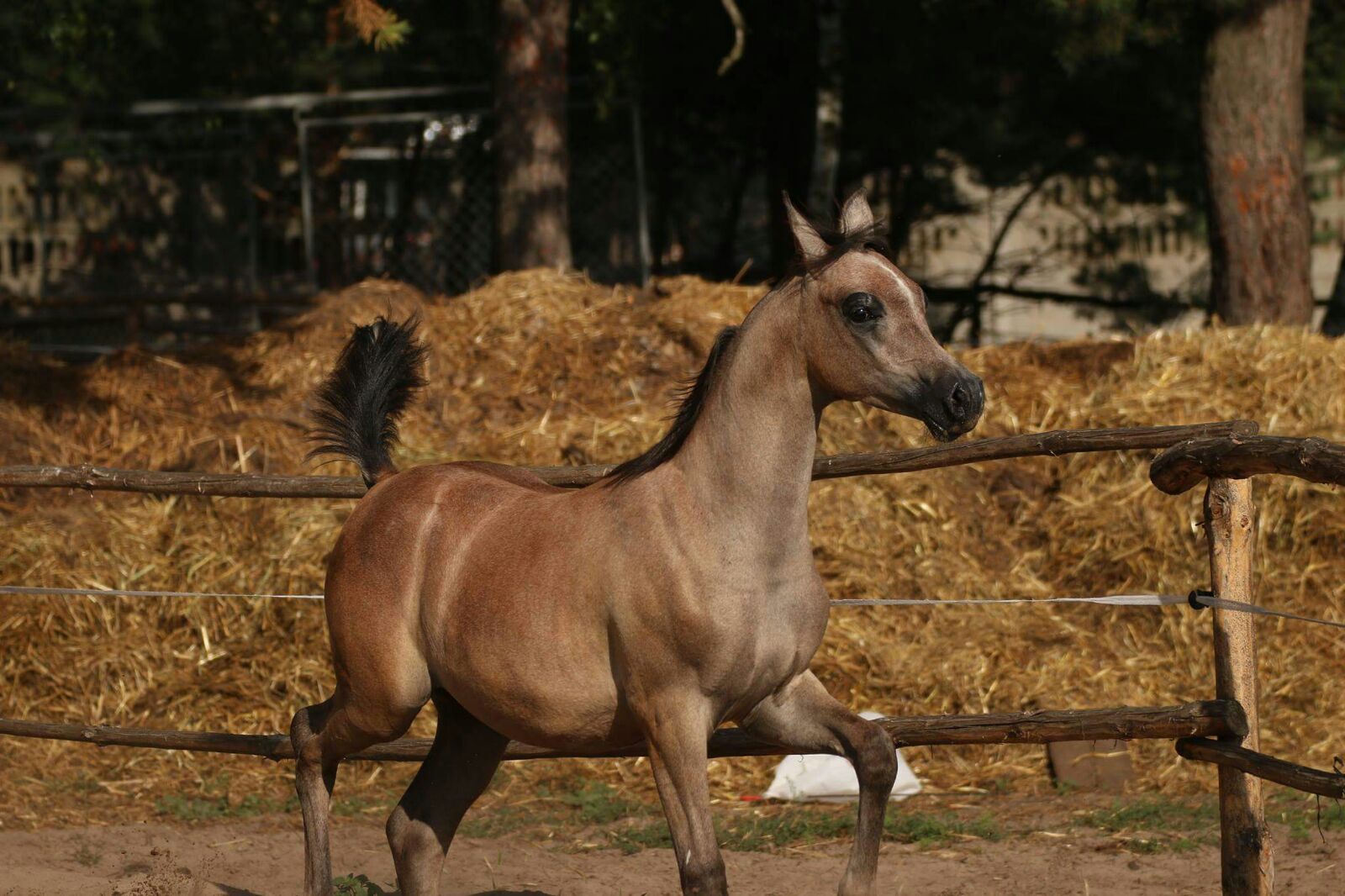 El Pusza PS is a very pretty, elegant, long necked and valuable bred young filly who is a daughter of Elnaya – out of Michałów State Stud’s one of best producing mares – Emocja sired by the legendary Monogramm and even more important:
out of most famous Michałów’s broodmare – Emigracja – dam of 14 foals (12 fillies!)and founder of a dynasty of champions of the renowned Milordka E-line producing Saklawi horses. Unfortunately she died: Nov 3rd, 2008 – at 28 Years.
In November of 2008, the Arabian horse world bid farewell to a legend. To most of the world, she was a familiar name in the pedigree of many of the most famous show and breeding horses of the past three decades. For the most fortunate international breeders and enthusiasts who had the privilege of witnessing the grand dam herself and her legions of superlative descendants in Poland, she was a living legend; a broodmare of remarkable consistency and prepotency. To her breeders and caretakers at Michalów, she was the most significant modern matron from the stud’s most revered and celebrated family of mares, the mare that single-handedly moved the genetic and phenotypic merit of the entire breeding programme generations forward as well as propelled the fortune and success of her maternal stud to unprecedented acclaim. Though her achievements had certainly earned her the royal moniker of “queen”, Emigracja was more appropriately beloved as the “pearl of Michalów” – a hidden treasure that is rediscovered anew each year with each successive generation of excellence.
Today, Michalow is the largest of the three State Studs, and can proudly boast more international champions in residence than any other Arabian breeding farm in the world. Michalow is still home to one of the world’s most exquisite collection of Arabian mares, including dozens of members of the universally esteemed “E” dam family through Estokada & Emigracja, descendants of the legendary daughters of Naborr & Comet, as well as the best of the living legend daughters of Monogramm & Gazal Al Shaqab.

Dam of Elnaya and granddam of El Pusza is Emocja – worldwide known as the dam of beautiful Ejrene, purchased by Ajman Stud, UAE for 440 000 Euro at Pride of Poland auction, title holder of twice Gold Champion at Wels and St. Oedenrode shows, Polish National Gold and Silver Champion Mare, Białka Spring Show Gold Champion, twice World Top Ten Mare.
Another famous son of Emocja and brother to our Elnaya is Espressivo, bred by Knocke Arabians, Gold Champion Stallion at Wels and Bruges, European Top Five Stallion, 3rd at All Nations Cup and 4th at Menton.
Some more details about Emigracja and Emocja: The American import Monogramm proved to be an outstanding cross with Emigracja as well. In the two years he stood at stud while on lease to Michalów, Monogramm covered Emigracja successively, resulting in exceptional fillies on both occasions. The eldest of these was the grey Etenta, who, among all the sisters, most closely resembles her dam. Superbly balanced with consummate construction, Etenta defines athletic brilliance at the trot with lofty animation, strength of suspension and powerful drive. Etenta is best remembered for her phenomenal performances in Paris at the Salon du Cheval, where she was named twice World Champion Top Ten Mare with perfect scores of 20 for movement. When crossed to straight Egyptian Simeon Sadik, Etenta produced the ultra-athletic HS Etiquette, European Champion Stallion and the sire of the 2010 Polish Derby winning racehorse Celtis.
The younger of the Monogramm daughters, Emocja, is the only chestnut among the Emigracja daughters. Emocja is more the pleasant blend of both sire and dam, with a lovely head, enormous eyes, a feminine upright forehand, distinctive maternal elegance, with an abundance of substance and style. Emocja is also a fantastic mover; shown for the first time only recently, she has earned strong finishes and high scores at both the Polish National Show and the All Nations’ Cup. She has produced well with a variety of stallions: among the best get of Emocja are Swedish National, All Scandinavian and Rio (Brazil) Champion Stallion Emiliusz (by Laheeb) and Polish National Junior Champion and Wels International Senior Champion Mare Ejrene (by Gazal Al Shaqab).
In 2009, an unprecedented event occurred when two granddaughters of Emanacja claimed both senior mare titles at the Arabian Breeders’ World Cup in Las Vegas – World and US National Champion Emandoria was crowned Supreme Champion Mare with European and All Nations’ Cup Champion Top Five Mare Embra finishing close behind as reserve.

Perseusz is known as the colt by the famous Laheeb, *02.01.1996 at Ariele Arabians of Bnei Zion, Israel; Grey Dahman Shhwan Stallion. What has Dr. Nasr Marei to say to Laheeb? => “Laheeb is a dream horse. He is beautiful, very complete and without defects. His disposition is unbelievable. I have never seen a stallion as gentle and as peaceful as Laheeb, all without losing a bit of any of the traits that you want in a stallion. He is tremendously charismatic and always the perfect gentleman.”
Laheeb´s sire was the highly decorated and internationally acclaimed sire of champions, Imperial Imdal [Ansata Imperial x Dalia by Morafic], who stood at the farm for three years during the 1990s; his dam was the imported foundation broodmare AK Latifa [Ibn Moniet el Nefous x Siralima by Ansata Ibn Halima], who topped the 1985 Legacy Sale, at $345,000.
Laheeb lived up to his early promise and won First place in his age class at the 1998 All-Nations Cup show in Aachen. There he caught the eye of two of Poland ’s most experienced horsemen, Marek Trela, Director of Stadnina Koni Janow Podlaski, and Jerzy Bialobok, Director of Stadnina Koni Michalow, both State Studs of Poland. They approached Ariela about leasing Laheeb to serve as chief sire at Michalow during 1999, and then at Janow Podlaski the following year. This would prove a tremendous opportunity for Laheeb. Following his first breeding season at Michalow, in 1999, Laheeb was returned to Frank Spoenle and shown at halter, winning several championship titles including Kauber Platte Junior Champion, European Reserve Junior Champion Colt in Verona, and Top Five at the
World Championships in Paris. Following the World Championships, Laheeb was picked up from the Paris show grounds by the Janow horse van and returned to Poland.

But let us look at the dam side of Perseusz … and this is one of the reason that we bought El Pusza PS and not only her dam Elnaya .. here we find: Pepesza!
Pepesza is not only known from the Pride of Poland auction catalogue 2006 where she then was sold to Hennessey Arabians in the US for 135,000.- Euro. Pepesza is since the memorable Pride of Poland auction in 2015 well knwon as the dam of Pepita who was sold to a breeder in the Middle East for the record price of 1,400,000.- Euro. Bred by Janów Podlaski Stud, Pepita has had five foals including four colts. Her two-year-old, Pitawal, by Kahil Al Shaqab, was Polish National Silver Champion Junior Stallion as a yearling.
Pepita was at that time the reigning Polish National Champion Mare, All Nations Cup and European Silver Champion Mare (among many other titles).
Pepita details are as follows:
breeder: Janów Podlaski Stud, PL
sire line: Kuhailan Haifi d.b. 1923, b. Khalef el Aouad, imp. 1931 Gumniska (PL)
dam line: Szamrajówka ~1810, b. Biała Cerkiew (PL)
See a video of Pepita here: https://www.youtube.com/watch?v=nOZ_CJ2lQHM

Pepesza, *1995, grey, mare: She is one of the most irresistibly beautiful and elegant daughters of Eukaliptus. PEPESZA represents the legendary “P” line, tracing back to PIEWICA through her grand dam PENTODA. PENTODA produced ten superlative foals, all of which became either a champion themselves or the sire/dam of international achievers.

And there is one more reason … who knows not Emira (Laheeb x Embra)? The interesting thing with this mare is that she traces like our El Pusza PS back on the sire line to Laheeb. And the dam line goes via Embra – Emilda – Emanacja back to Emigracja! 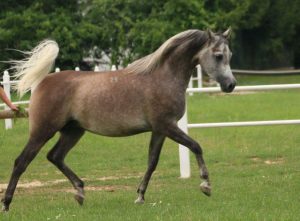 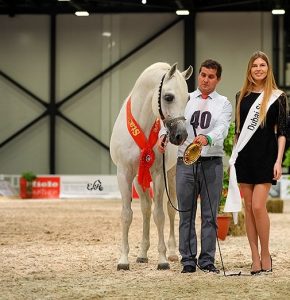 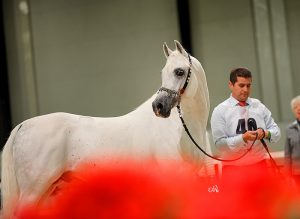 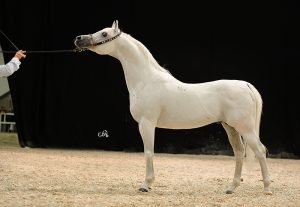 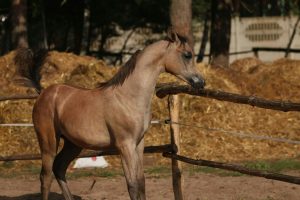 El Pusza Ps as foal - not weaned yet 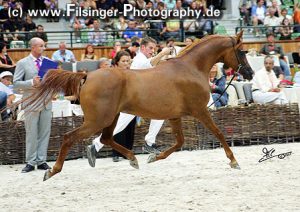 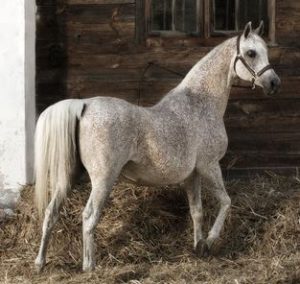 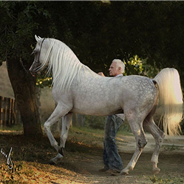